When people ask me if I like to travel I usually give them the same response “I’m not #wanderlust but I’ll travel if presented with the opportunity.” No, I don’t mean a great deal on an all-expense paid trip to Italy, I mean real spontaneity with good people and loose plans. That’s my kind of travel… Likely because if I had to plan ahead for a vacation I would always pick my ocean first. There’s no place like home and with a 9 to 5 land job I am not home nearly enough.

How’s this for spontaneous – I met this awesome tiny human (Allie) at my other fabulous friend’s pool party (Kelly, she was also with me for Denver) & we vibed. When you know, you know.

Alas, our drinks saw us end the pool party in opposite localities before we could even exchange numbers.

Fast forward a month later to last Monday and my tiny meatball soulmate slides into my DMs on Instagram asking if I wanted to go to Atlanta that same weekend. 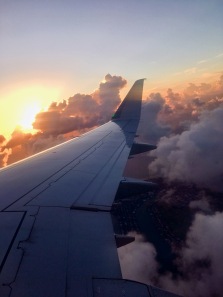 Landed Friday and went straight to the Georgia Aquarium. Duh. I think this was my fourth time there. It is one of my favorite places in the world.

I love jellies they’re so pretty but its cool getting so close to them without worrying a wave is about to knocked those pretty stingers right into you. 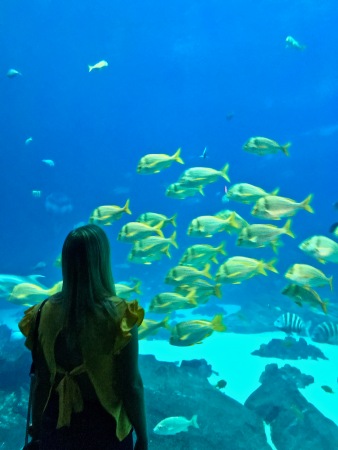 Walking next to fish is the weirdest feeling. I don’t think I will ever get over it. It’s a trippy sensation… kind of what I imagine sea sickness feels like… sans nausea.

But who doesn’t love a good trip sometimes?

There’s a penguin exhibit you can crawl into and at least feel like your are right next to them. Smells like feet and fish… worth it. 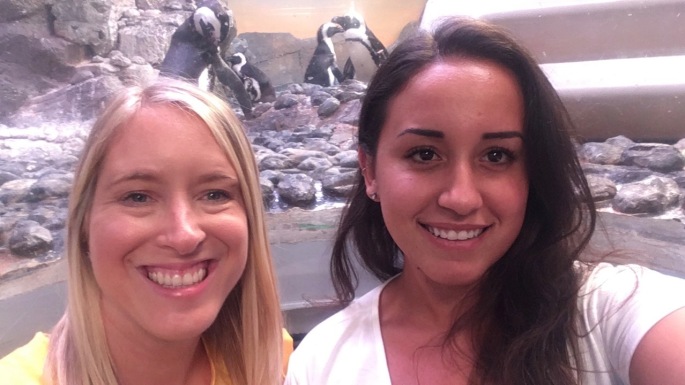 Everyone’s favorite exhibit is one of the world’s largest indoor aquariums:

^Don’t tell Jerry… that grouper means nothing to me! (not true I love all animals equally but yeah Jerry strikes me as the jealous type)

Obviously, I am all about the animals but what really gets me about aquariums, zoos, and the like is watching people fall in love with what I love. What I consider to be the most precious thing in the world:  animals, & the environment. Honestly, I get high watching people get hype about animals. 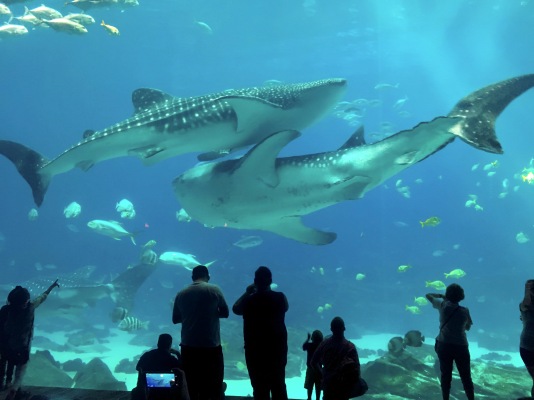 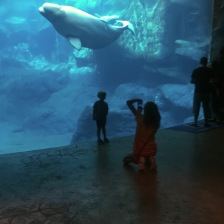 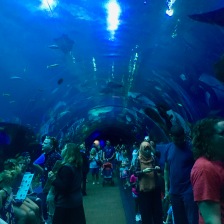 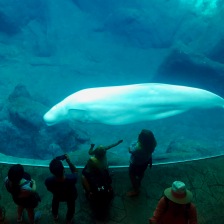 You know that step brother’s meme that’s like “DID WE JUST BECOME BEST FRIENDS?!” That is how I feel about every human having a good time at these places. I love you fellow hyped humans. Take all the selfies, stare at all the things, & love all the animals.

Aquariums are so important – not just for the vital research they conduct – but to spark that passion within humans who may never have the chance to experience these animals in the wild. People only save what they love and they only love what they know…

We left the aquarium and walked aimlessly through Olympic park… 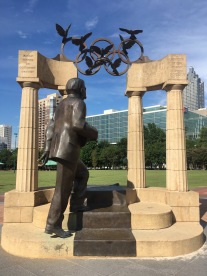 It was too hot and we were too famished to pose but there’s your photo opp.

Our hunger lead us to Twin Smoker’s BBQ where we debated sharing an entrée… but then each got our own.

As a Cuban, my eyes always find lechón(pork) in a crowded menu…

Then we headed to an area heavily recommended called Buckhead… specifically the Buckhead Saloon. We had a few drinks and watched the place get crowded… well what we assumed people outside of Miami considered crowded.

The USA in me always finds the whiskey…

Around 1.00 am we found a hotel that wasn’t booked. It was the Sheraton in downtown right next to the aquarium.

The rooms were super dark and I slept in together with the other girls until about 10.00 am. This is late for me. I am a morning person. We explored the hotel in the daylight – gorgeous – and hit the Jacuzzi before leaving to look for breakfast… 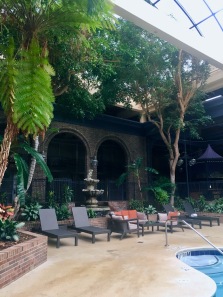 …Which we never found because by then it was the afternoon and no one wanted to give us waffles. Rude.

We were laughing but it was out of delirium…

So, we settled for Braves All Star Grill where the servers were very attentive and the food was A1.

Ran around Peachtree street trying to find our Uber. The Uber situation in Atlanta is a problem. All the drivers are very nice and gave us awesome recommendations but we didn’t have one ride where it was an issue finding our driver.

Found the car and were whisked away to the High Museum of Art. It was really cool. 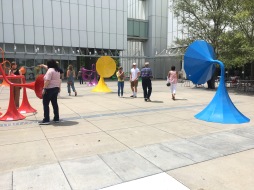 They had a Winnie the Pooh exhibit which was interesting… even though I read an article on Digg (it’s an app I use that is just a feed of cool or interesting articles) about how the family behind the Winnie the Pooh stories was actually torn apart by the story books… it occasionally put a damper on things but our own battles with anxiety and bouts with depression let us see the humor in it all.  YAY for emotional instability ❤ 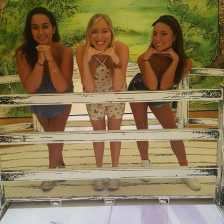 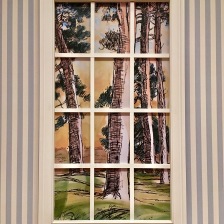 My favorite pieces were by John B. Flannagan who was an American sculpture that preferred field stones to naturally and “intuitively” carve rock. So basically he carved with his heart. I feels that: 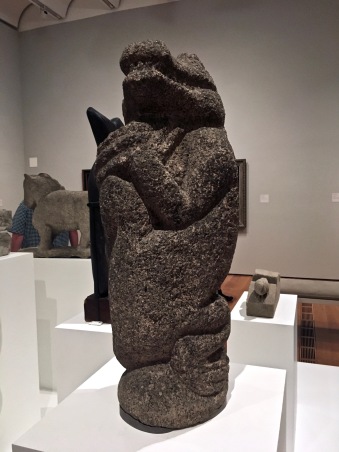 On the left the Dragon and on the right Jonah and the Whale: Rebirth Motif. Loveee

I love anything with that animal/nature vibe: 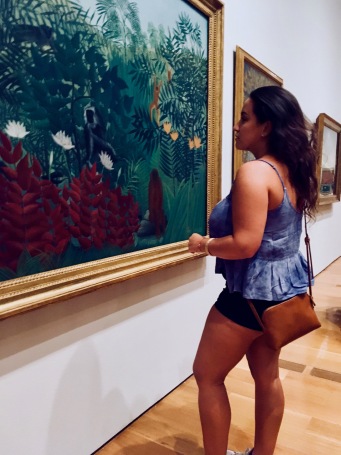 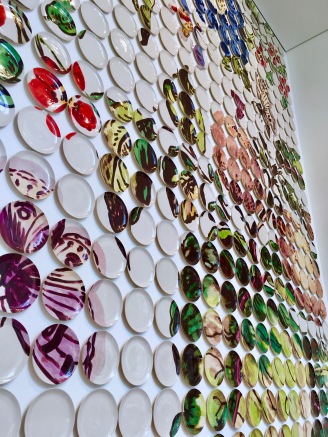 Yes, we were initially drawn to this because it was huge and we could take cool pics in front of it but I really did like it. It was a piece commissioned by the museum from Molly Hatch and was called Physic Garden.

After the museum we drifted around midtown for a bit while simultaneously looking up other cool things to do in the area.

& discovered Krog Street Tunnel online. Which is basically just Wynwood if Wynwood was a tiny tunnel packed with cars. It’s right next to a mini mall called Krog Street Market. How good any of these are we could never tell you because as soon as we arrived it started pouring…

Allie and I are all about a good roll in the rain but Kelly is not. Her species of Cuban is the one where two drops of rain water can and will kill you. “Oh, look we can just drive through it” she rejoiced when we realized it was just a tunnel to drive through… the insta pics would have been phenomenal. #RIP

Changed our destination to the hotel.

We found this meme on the ride

It’s really hard to write about an inside joke. My abs are still hurting for the laughing seizure we had.

probably from years of not keeping our goblins in check… However, Kelly didn’t get the meme because she is too much of a catch. #goals

Although Kelly was craving chocolate ice cream we convinced her all desserts had to be Atlanta-y so we got peach cobbler from the hotel bar for the room:

After some R&R we went to eat at an Irish pub called Meehan’s. Good food, good times.

I thought the waiter said Nipple when he handed me the check (instead of Nicole) another three-person strong laughing fit. I swear we are adults with adult responsibilities and fulltime adult jobs.

On the way back, we stopped at a liquor store across from the hotel. It was weird. All the liquor was behind the counter and we couldn’t grab our own bottle… which FYI is bad luck… maybe not but I make up superstitions daily and this felt like one.

Crazy Atlanta Travel Bar was directly across the street from our hotel… we were told it
would be crazy… but we were literally the only people in the venue besides the bartender… so we took shots and ordered an Uber. Woop.

The Dark Horse Tavern was our next stop. It was pretty slammed with patrons, mostly guys, and no cover fee. We walked back and forth and ordered drinks. The Dark Horse is where some petty ladies tried to get us kicked out??? We were in the bathroom hyping ourselves talking about how good we looked (not sorry) and some girls went and told the bouncers we were talking trash and making them feel bad… the bouncer laughed with us when he told us. It’s sad that girls can’t just stick together. In Miami, the bathroom is where girls make lifelong friendships. So this hostility was foreign to us. But sweat no bitch right?

We made friends with two guys whose names I will never remember and followed them to the next bar. Much more poppin. This is where we stayed most of the night but we continued to explore the whole area.

We painted the town neon pink & blue in our matching black rompers… but were too busy enjoying the night to get one good picture of all of us… so here are some blurry ones and a boomerang.

Day 3 –  the promise of brunch got us up and ready. There was a full day of drinking ahead of us. We Ubered to The Warren and realized it was the same poppin’ bar we spent most of the previous night at.

What was a slightly raunchy outdoor area at night became a gorgeous upstairs patio during the day. My exact personality. 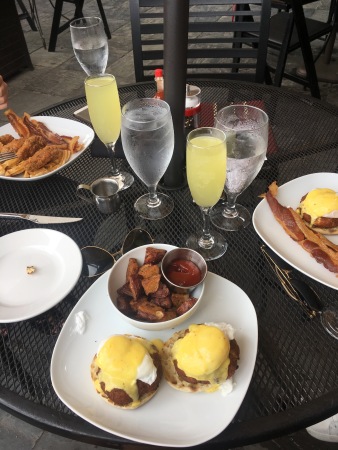 Bottomless mimosas for the win. They have a bunch of flavors but my favorite is pineapple. We stayed here for maybe three hours… gotta take advantage of the bottomless mimosas. Also the lighting was phenomenal..

Then we walked (me in a dress in heels #trooper) a mile up the road to little five points. The area was super cool and filled with bars.

We met up with Kelly’s friend Matt. 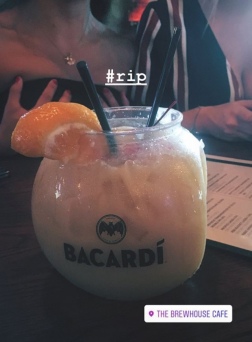 And played darts. Allie & I were team meatball.

Back to the hotel again. But just to change outfits (something more conducive to running all over the city) and down the rest of our vodka.

Our intoxicated halves said screw trying new things and marched us to Hooters. Where things got… weird.

I am going to be very candid with you all. We got drunk. Responsibly drunk. But drunk.

Matt was an awesome chaperon and lead us to different bars, a pool table, took pictures of us: 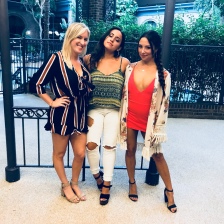 & made sure we made it safe to the hotel. We high key battled the previous night to keep creepy guys away from us but he kept the them at bay.

Also, he calls butts “poopers.” Irrelevant but worth the mention.

Somehow woke up early enough to make my 6.30 am flight back to Miami… with everything except two nails… RIP

Honestly my Instagram stories are just a never-ending saga of a tomboy sirena(mermaid in Spanish) trying to keep her nails nice. & failing.

Atlanta was a blast and we didn’t even get to all the places we had planned to. We will definitely do an Atlanta part 2 trip to hit the rest of list… and obviously go to the aquarium again. Whoop whoop